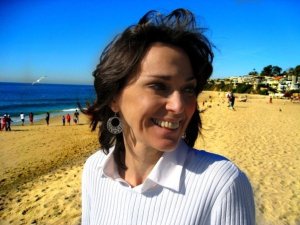 If there was something to remember from her it’s to be a person who is selfless and obeys the Lord with complete faith.

In elementary school I went through having a speech problem (not pronouncing my “r’s”), was picked on by the neighbors and hated math. During those days mom was who I ran to if I needed to cry or vent to. This didn’t change in Jr. High when I had problems with a few friendships, mentoring falling outs and sibling fights. Then came High School where by now I’ve had several years of words of wisdom from mom who had showed me how to handle situations and ultimately release and rely on God.

In addition to hardships she shared in my joys and triumphs. Going to Mexico, North Dakota, Guatemala on mission trips, becoming Photo Editor for the High School Newspaper and Editor-in-Chief of the Yearbook mom was always in complete support. She was heavily involved from writing letters or looking over my ideas. In high school I went through a phase of having on average four coffee dates every weekend to hear my friends life adventures and would find myself bearing any problems they had. It was awesome having mom acknowledge the role I played in their lives and she encouraged me to take time for myself and relax instead of dedicating all my time to friends and their lives. Without her support and encouragement I wouldn’t have learned the importance of “me” time.

August 1999. I was going to California for a month to visit family and friends. The day before I left I remember being sat down and having her explain to me that she would be in the hospital for a while during my absence. As an eight year old my compassion for others and deep sensitive heart was still maturing, so you can only imagine the little detail I got as to why she was going to the hospital. All I knew was she would have shorter hair when I returned and I wouldn’t be able to talk to her much that next week. Little did I know she would be going to the hospital to have a large brain tumor removed.

It wasn’t until I got home from California where I saw the changes that had been made while my mom was recovering. All of us kids were sent to different friend’s houses’ daily and had different rules in the house. I dealt with these changes for a week, but that was enough for me. Dealing with nights of not being tucked in, hearing three year old John cry because he wanted his “mommy” and seeing Dad overly tired became too much for me to bear. She came home after being in the hospital for five weeks and over time I learned how life threatening her surgery became and how God miraculously healed her after the doctor told my dad she might not make it.

There have been moments when tears come to my eyes because I’m so thankful God intervened and healed the most wonderful woman I know. She is my role-model, admirer, cheerleader, and encourager. I take pride in being able to call her mom. So many people use her as an example when they describe a good friend, wife and mother-I am truly blessed.

Selfless.  I’m going to be repetitive and say again that I can barely even write anything about her without crying. I’ve written, deleted and re-wrote several paragraphs because no story or section has justified the awesomeness she brings. For the love.

Lets see…I’m just going to bullet-point events and whatnot of where she’s selfless.

1.      This one could take up pages. I would say dedicating roughly 20 years solely to raising kids intensely is pretty selfless 😉

2.      Waking up in the middle of the night to bring any sick child medicine or “check-up” on us.

3.      Waking up early and making malt-o-meal and coffee. Some mornings she made baked oatmeal or banana bread and those always set the morning off to a great start.

4.      Just like I wrote in Dad’s section that he sacrifices…she does too. They’re a great team. She spent the money from her SLAT business on things for the family, gifts for others or certain bills. After long days of homeschooling, phone calls and emails she’d go to SLAH parties and return late to repeat it all over again the next day.

5.      Even though she isn’t the greatest fan of cats her and dad gave Penny to me as a Birthday present.

6.      She mails me cute cards. During one of my hardest weeks in Kansas she mailed me a white watch and the cutest card. Before I flew home she mailed me another cute note with $4 for a magazine for the air-port. And then 8 weeks before my Christmas break she mailed me a countdown.

7.      Editing  my papers, helping with homework, projects and other miscellaneous tasks.

8.      Being a great host. When we have friends coming over she immediately cleans up, makse something from what’s in the kitchen and sets the atmosphere to be welcoming and relaxing. People always tell me how much of a great host I am and I give her ALL the credit for teaching me how.

She is the Queen of   doing little gestures that make the greatest impacts.

1. She knows I like things in writing and in high school I still remember opening my bathroom drawer and seeing a V8 Juice (my favorite) with a bow on it and a note that said “hope you have a great day Sweet Mary. I Love you.”

2.   Driving home after my last final Jr. year of high school and pulling up to balloons on the mailbox. In the mailbox was a card that said “Look Who’s a Senior :)”

3.  I lost one of my favorite bracelets that was lost for over a year. One day after school I walked up to my car where I found the bracelet hanging from the rear-view mirror. She had found it, cleaned it and drove it over to surprise me.

4.      Waking me up on mornings stroking my face with a soft make-up brush. So quirky but I loved it.

5.     Making coffee every morning. Patrick can testify how awesome it is to know when you wake up there is always a pot of coffee ready.

7.   She rented me an abundant amount of DVDs from the library when I was sick, making me grill-cheese sandwiches and tomato soup.

8.      Asking to “be” with her weather its sitting on the counter while she makes dinner or drive along on a bank run (which is the most boring errand EVER), it’s precious how  she just wants to “be” with her kids. 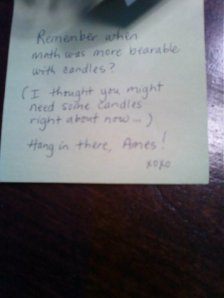 (a note to Amy, who spent Christmas break studying for the GRE) 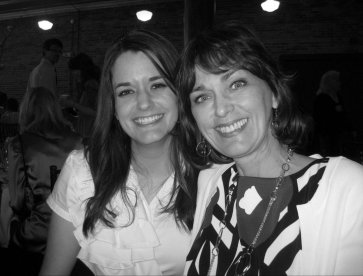 So many people say their mom is the best. That phrase has always bugged me. Maybe because I get protective of my mom and think “well then  you don’t know my mom” but then I feel bad for thinking poorly on their mom. There are a lot of great moms in the world. However, I know my mom was chosen and was tailor-made to be the perfect woman to raise me, along with Warren, Amy, Patrick, Anna and John.

One thought on “Momma.”