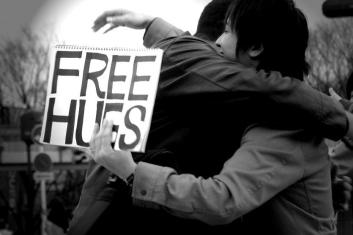 In December of 2011 I went to the Kansas City Ballet. I wore a flattering black dress, spoke with red lips and walked in classy flats — quite different from my dirty apron,  messy bun and coffee stained shoes. At intermission I spotted John, a regular customer I saw every morning. I knew his wife was recovering from back surgery while their master bedroom was being remodeled. I approached him to say hello. He was startled, uncomfortable, awkward — different from the personable demeanor I knew. He didn’t know how to treat me, his morning barista now as an acquaintance. He made jokes about fetching him a coffee and said he was surprised I enjoyed the arts or, get this, even knew Kansas City held ballet performances.

From that moment on I promised myself I would befriend all positions in any work environment I’m in. I hated feeling less-than, not equal to or below John at the ballet.
I have great respect for professors, doctors, and producers – those who’ve established themselves professionally. That’s hard, bro. Mad respect. #youwinningfosho

In no way, however, do I think being condescending is appropriate. Zero chance.

The jobs looked down upon are typically held by people who’re in a line of work we “literally just can’t even” to. Would you want to clean toilets after the Dodgers game? Clean sewage pipes? Go office to office at 3am taking out the trash and vacuuming? Or what about cleaning windows in 100-degree weather?

People who’re doing these tasks are invisible, but most noticeable if the job is forgotten. Joe the night janitor isn’t operating on your Grandpa’s heart or educating your daughter in mathematics. He is a person though, a man who probably would appreciate the acknowledgement of existing. We don’t have time to get to know every person’s life story, but we have time to give everyone eye contact in passing and simply say hello with a smile.

Furthermore, any employee is doing something the silver spoon-fed 30-year-old guy in his parent’s guest house isn’t doing: working.
To achieve any goal one must pull up their sleeves, put in the time and many times, put their pride aside EVEN if that means being the person who picks up Starbucks cups off the curb at LAX. I have more respect for those working ANYWHERE than for the guy or gal sitting around hoping their dream position opens up.
I didn’t want to be a slave to debt after college. I didn’t want to relate to every Buzzfeed article about how people in their 20’s don’t have their life together. I didn’t want Sallie Mae to have my name in the system at 40.

To achieve this with the cards I was dealt I had to step-up and work.

I enrolled in 15 credit hours and accepted two jobs when I moved to Kansas in 2009. I became the sorter of crusted, stain-filled pants at Tide Dry Cleaners and a barista at the cheesily named coffee shop LatteLand. Holding two jobs with 15 credit hours in a new environment became a tad stressful. So, after my clothes, coats and blankets were dry cleaned (fo free), I quit Tide and stuck with being a barista until graduation in 2013.

I don’t regret how I used my time in college, but I do regret being so hard on myself. I never felt like I could enjoy free time because there was always something I could be doing: tightening my paper, studying more, editing a project longer or picking up an extra shift for extra cash. Rest assured I had friends who made sure I had fun during my chaotic schedule. I was not a hermit.

I needed something to happen though in order for me to let loose and learn the balance of fun and work.

Something did. I was the passenger in a car accident.
T-bone collision. Ambulances. Tow trucks.

Despite a concussion, severe whiplash, a burned arm and several bones oddly misplaced, I was stubborn and not only refused to go to the ER, but I drove myself to work following the accident.

My brain couldn’t register anything at work. I didn’t walk straight and I nearly fainted several times. A co-worker called my manager and I sent myself to the hospital. I went home with documents instructing me not to set foot at school or work. Sentenced to the doctor every other day for four months my year now focused on rehabilitation rather than researching.

Those months were inconvenient, physically exhausting and, to be frank, annoying.

Refusing help from paramedics and clocking-in to serve customers with injuries put my independence on a new level. I placed value on my education and work above my physical and mental health.

I was able to acknowledge the stupidity of this once I saw the fruit from resting. My brain was sharper; I was more energized and a lot happier.

I believe God used that time to release the burden of being hard on myself. Life put me in a place of forced rest and I saw just how much “Mary time” positively affected me mentally. I learned the importance of saying no to both people and homework to instead recharge. Putting aside work to focus on my mental and physical health was not a weakness, it was strength, and a lesson I learned the hard way.
The accident permanently affected my neck and knee, but I could’ve died. It showed me that no matter what, as long as I’m breathing, everything will be okay.

The accident also gave me perspective: we don’t know where anyone is at in their personal life and most often than not, people are struggling through obstacles and need grace. When I went back to work after the accident I was slower, my body was still in pain and I needed grace from both co-workers and customers. I was absorbing lectures slower and needed patience from lab partners and professors.

Fast-forward a couple of years to today. I was chewed out a few months back from a co-worker. I had accidentally bcc’d someone on an email when I should’ve cc’d them. It’s a deal, but it isn’t a big enough deal to be picked apart for 15 minutes. An hour later this co-worker got a phone call. His dad passed away. He broke down at his desk and I sat back (devastated for him) realizing (again) everyone I’m around has a life they leave at the door when they come to work they may take out their frustration on the little things because everything else is out of their control.

I guess what’s on my heart is this: work of any kind needs to be given respect. When you’re given a job, a responsibility or a situation where you have to step-up, don’t complain. Give 100% with a grateful attitude and kindness towards others.
Life will happen. You’ll get sick, you’ll get a flat tire and, hopefully not though, death or an illness might happen to a loved one.

You’ll want patience and grace from co-workers. I’ll tell you right now that if you’re lazy or have a bad attitude many things won’t go in your favor.

And when you’re off the clock, have fun. Write blogs, watch Homeland, go on photography explorations, do yoga, hang with family, travel somewhere. Whatever recharges you.

There is beauty to having a strong work ethic, as well as a strong mental state. To be strong mentally we (usually) need to take a step back and rest.

I’m still learning how to balance everything. I mean, I’m in my twenties and don’t need to have it all together, right?